The recommendation for April 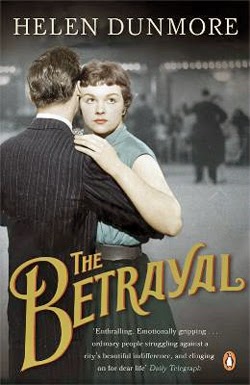 Helen Dunmore is a British poet, novelist and children's writer. She studied English at the University of York and after graduation taught English as a foreign language in Finland. Nowadays Helen lives in the city of Bristol. She has won awards for her fiction and also for her poetry.

When she is asked about the beginning of her vocation she explains the fact that her father was the eldest of twelve and that extended family has no doubt had a strong influence on her life. As she admitted: ”In a large family you hear a great many stories”.

In the late 1980s she began to publish short stories and these were the beginning of a breakthrough into fiction. Her first novel for children was “Going to Egypt”, published in 1992 and her first novel for adults was “Zennor in darkness”. After that she has written others novels such as “A spell of winter”, The five chronicles of Ingo, “The Siege”, “Counting the stars”... In 2010 it was published “The Betrayal”, the novel which we want to recommend you.

This novel is set in Leningrad in 1952 - 1953, the final year of Stalin's life. Leningrad in 1952 is a city recovering from war, where Andrei, a young hospital doctor, and Anna, a nursery school teacher, are forging a life together. Summers at the dacha, preparations for the hospital ball, work and the care of sixteen-year old Kolya fill their minds. They try hard to avoid coming to the attention of the authorities, but even so their private happiness is precarious. Stalin is still in power, and the Ministry for State Security has new targets ahead. When Andrei has to treat the seriously ill child of a senior secret police officer, Volkov, he finds himself and his family caught in an impossible game of life and death. In that period the city is ruled by whispers and watchfulness, so the betrayal can come from those closest to you. In fact, Andrei is a great professional and it seems he will have a successful career to develop. However, Andrei will have to face an accusation of unprofessional behavior.

This novel is a deeply moving portrait of life in post-war Soviet Russia. "The Betrayal" brilliantly shows the struggle of ordinary people to survive in a time of violence and terror. We want to encourage you to read this book because it has an interesting plot which you will enjoy. We are sure you will not put it down until you have finished the 327 pages which are part of this novel.
en 17:36